Congratulations to Tommy Martin on his win on Sarurday 8th March 2014.

All of us at Junction 17 cars would like to say a massive well done for beating his opponent on points and are proud to continue our sponsorship of the young and talented boxer for years to come!! 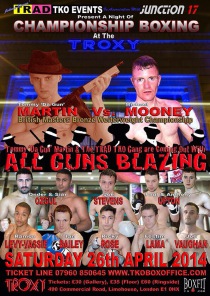 Supported by more than 200 of his 'Team Gun' devotees, the St Neots boxer coasted through his ninth professional fight, which was top of a bill of 11 bouts, for the British Masters Welterweight Bronze title. There was a late cancellation by Ashley Mayall, who Martin was originally lined up to fight, just days beforehand - but the new opponent was no match for the Hunts fighter.

''It all changed just a couple of days before the fight,'' said the 20-year-old, now back at home in St Neots, nursing a sore hand. ''All I knew about Mooney was that I had beat someoe in sparring who had beaten him in the ring, so I went into the fight full of confidence.''

It was Martin's first eight-round fight but he was scored ahead of his 28-year-old opponent in seven of them for a 80-73 points victory. But he didn't come through the bout completely unscathed and was in hospital having X-rays on his left hand until the early hours of Monday morning. ''The hospital said it was from where I had hit him so many times - from the impact. I haven't broken it but there is some tissue damage so I have been tolod I am not allowed to punch anything for two weeks. So my short-term plan is to spend some time with my family and friends, pick up a Porsche from my sponsors Junction 17 cars, and enjoy myself!''